Class is in session! You do a job long enough you learn a few things. So we know 2, 6 and 11 are bad numbers for record promoters.

When country radio today gets a new record from Carrie Underwood we are BIASED in favor of playing it. WHY? Because she is a superstar with equity. Her face is on the Mt. Rushmore of Country Music Stars.

Cry Pretty never tested very well. Capitol fought that one hard. It was the title cut from the new album. They channeled their best Monte Hall and got that song to #9. It was a heavy lift. Then came Love Wins. It also tested uh… less than Capitol would have liked. But we played the song because it was Carrie. Their job as record promoters is to “promote” and they did but fell short and the song will forever be a #11.

I’m sure we all have great faith in Southbound. To me it is sonically better. Even the very biggest female in the format get bias in her favor but the songs didn’t test well enough to get the songs to above 11 and 10 respectively.

Next class will be about newcomer Tenille Townes.

This is me way back in Seaford, Delaware when 1280 WSUX (that’s right WSUX-AM) was country. It was a day time only station and in the summer was on the air till 8:45pm. That gave me an after school summer job. They made me music director. This was 1976. Red Sovine -Teddy Bear which I added was on the air. I knelt down because I wanted it to capture the studio equipment in the picture. Adjunct Professor Keith Hill with a BA in real world experience. (Beware of folks with a Doctorate in Musicology who have never worked in radio and never added even one record!) 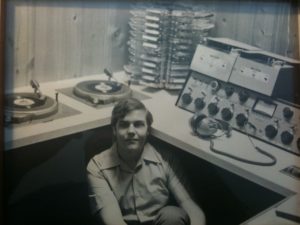